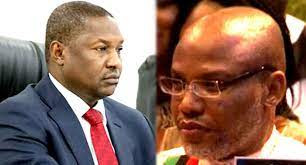 The Minister of Justice and Attorney-General of the Federation, Abubakar Malami, says the Federal government cannot release the leader of the Indigenous People of Biafra IPOB despite the Abuja Appeal court issuing an order for his immediate release.

In an interview with Vanguard, Malami said the rendition of Nnamdi Kanu could not be used as the only basis to free the IPoB leader of other offenses allegedly committed by him against the Federal Government of Nigeria. He explained that the government was holding on to Kanu on account of four major issues, which were preceded by the rendition matter for which the court cleared him.

RELATED  Listen to Africa on climate adaptation and resilience

Let me talk first of the rule of law. This is someone that has been granted bail on account of charges that have been preferred against him at the court. Someone jumping bail to international community, a case of fugitive is established against the background of jumping the bail.

Two, arising from the national security, this is someone that is charged with treason, incitement and destruction of civil authority, murder and assassination of others on account of his incitement, that boils down to issues of national security and criminality.

Three, on account of international diplomacy, this is someone that has against his person, used the international community or a foreign country to launch an attack against a nation, against his nation for that matter.

So all these naturally come into play to determine what to do. So if you have through judicial processes established multiple cases of treason, homicide, bail-jumping among others; the fact that you have indeed succeeded in one case as against multiple others that are pending, goes to establish the fact that that case cannot be the only basis and criterion for determining whether you are entitled to be released or not.

Other than the case of rendition, which is indeed the only case that has been determined, there exist in the system other cases relating to jumping bail, other cases relating to inciting the public, other cases relating to murder, homicide, among others and indeed above all, within the context of the rule of law, the right of the federal government to challenge the decision that bothers on rendition, a challenge associated with the appeal, a challenge associated with setting aside certain judgment if the need for doing so arises and indeed the multiple challenges within the context of the rule of law at the disposal  of the federal government to exercise.

So, the simple question is, whether what the federal government has done, by way of not releasing Kanu is justified within the context of the rule of law and my answer is yes, it is justified. This is because the single case that has been determined is not the only pending case against Kanu.

There exist other multiple cases associated with treason, there exist multiple appeals that are pending and yet to be determined and then again, there are international public interest dimension and the essence of the government is the sustenance of a public and not an individual interest,” Malami explained in the interview.

Recall that the Appeal Court in Abuja and a Federal High Court in Abia State have all freed Kanu on the basis of the fact that he was arrested without explanation in Kenya and returned to Nigeria to face charges after fleeing the country several years ago.

The Federal High Court in Abia imposed N500 million on the federal government for the act of rendition, which Kanu demanded as compensation for the action of the government.