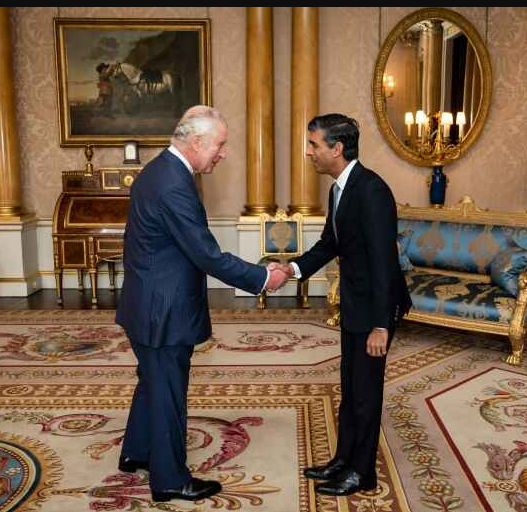 The tradition sees the monarch invite the leader of the party with the highest number of MPs to form a government, which since the 2019 general election has been the Conservatives.

In a speech outside 10 Downing Street after the meeting, Sunak said: “Our country is facing a profound economic crisis. The aftermath of Covid still lingers, Putin’s war in Ukraine has destabilized energy markets and supply chains the world over.”

He paid tribute to his predecessor Liz Truss, who he said was “not wrong” to want to improve U.K. growth.

He said, “some mistakes were made,” not “borne of ill will or bad intentions” but “mistakes nonetheless” and he had been elected “in part to fix them.”

He added: “I will place economic stability and confidence at the heart of the government’s agenda. This will mean difficult decisions to come. But you saw me during Covid doing everything I could to protect people and businesses with schemes like furlough. There are always limits, more so than ever, but I promise you this. I will bring that same compassion to the challenges we face today.”

Sunak is now expected to begin appointing new cabinet figures in yet another reshuffle at the top of British politics.

He was elected party leader by fellow Conservative lawmakers on Monday, October 24, following the resignation of Truss on Thursday, October 20.

Sunak is the third prime minister the UK will have in one year.

RELATED  Democrats won the Senate after flipping Georgia last year. The state could be pivotal once again

Biden’s top economist is stepping down. See the list of contenders to replace him

Biden’s top economist is stepping down. See the list of contenders to replace him