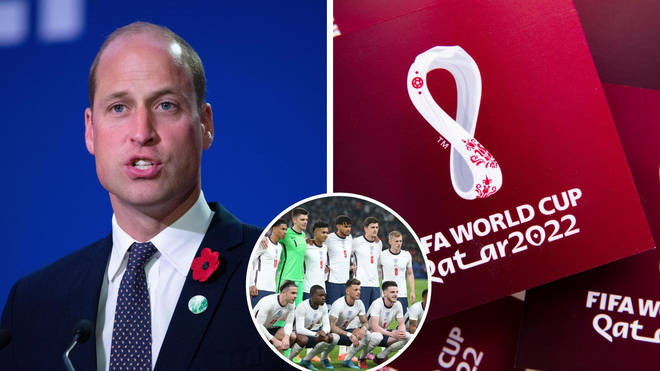 Prince William will reportedly not be traveling to Qatar to watch England play in the 2022 World Cup amid a growing row over the country’s human rights record.

As the FA President, he was expected to attend the games in November with England’s first match against Iran on the 21st. But The Sun reported last night that the Prince is unlikely to attend even if England makes it to the final on December 18.

‘The report said the Prince’s decision to stay away is due to a busy diary.

But Qatar has received heavy criticism for the conditions for stadium workers and the country’s criminalisation of same-sex relationships.

Same-sex relationships are illegal in Qatar due to its strict Islamic rulers.

It has also emerged that Amnesty International has urged Fifa to pay at least £350 million of compensation to Qatar stadium workers for the ‘human rights abuses’ they have been subjected to.

Prince William, a staunch advocate for LGBTQ rights,  became the first royal to appear on the cover of gay magazine, Attitude in  2016.

He told the magazine at the time: ‘No one should be bullied for their sexuality.’

Several captains including Harry Kane are planning to wear armbands in support of LGBTQ rights during the tournament.

In a report released on Monday, Human Rights Watch said police in Qatar have arbitrarily detained and abused members of the LGBTQ community ahead of the World Cup next month. Homosexuality is illegal in the Gulf state.

HRW said it had ‘documented six cases of severe and repeated beatings and five cases of sexual harassment in police custody between 2019 and 2022’.

The most recent case was in September after four transgender women, one bisexual woman and one gay man all told how members of the interior ministry’s Preventive Security Department detained them in an underground prison in Doha, the US-based rights group said.

There ‘they verbally harassed and subjected detainees to physical abuse, ranging from slapping to kicking and punching until they bled’, HRW said.

One Qatari bisexual woman said she was beaten until she ‘lost consciousness several times’.

The report added that a Qatari transgender woman told how she was held once for two months in an underground cell and once for six weeks.

‘They beat me every day and shaved my hair. They also made me take off my shirt and took a picture of my breasts,’ she said.

She said she had suffered from depression and was afraid to go out in public since.

In all cases, the detainees were forced to unlock their phones and had contact information on other LGBTQ people taken, HRW said.

Sex outside marriage and homosexual sex are both illegal in the conservative Muslim state and can be punished by up to seven years in prison. But none of those detained said they had been charged.

HRW said the six appeared to have been held under a 2002 law that allows for up to six months’ detention without charge if ”there exist well-founded reasons to believe that the defendant may have committed a crime,’ including ‘violating public morality’.

A Qatar government official said the allegations were ‘categorically and unequivocally false’.

Qatar does not tolerate discrimination against anyone, and our policies and procedures are underpinned by a commitment to human rights for all.’