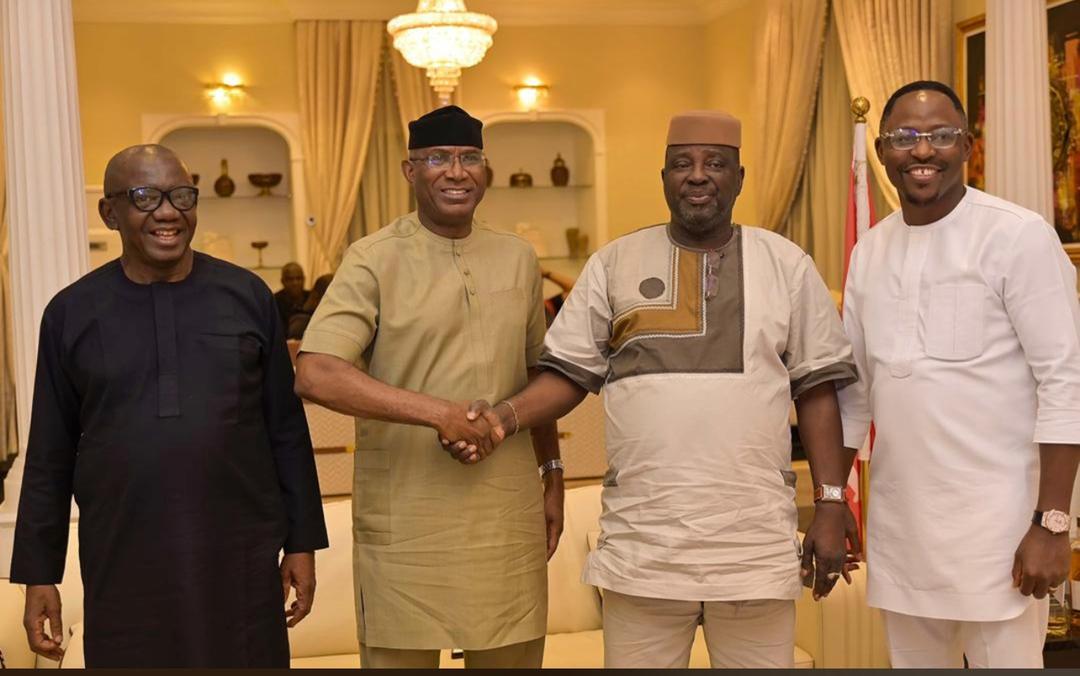 Credible sources in Osawota’s camp revealed that he was at the GRA Effurun residence of Senator Omo-Agege late Thursday to formally inform him of his decision.

TheNewsGuru.com (TNG) recalls that sometime 2009, Osawota was accused of having carried out massive fraud at DESOPADEC.

In a petition published by Saharareporters, he was accused of non remittance of 10% vat and withholding tax to Federal Inland Revenue Services (firs) deducted from contractors to the tune of 2 billion naira.

See the petition below:

RELATED  Kyari, others inmate to benefit from SEOF donation

The prompt and immediate commencement of investigation of Chief Andy Osawota will save Federal Inland Revenue Services (FIRS) in particular and the Federal Government of Nigeria in general from the loss of huge revenue which ought to be paid to the Federal Government Account as deduction at source from contractors handling various capital projects with the Delta State Oil Producing Development Commission (DESOPADDC) but which said fund are been paid into Chief Andy Osawota’s private bank account through the Chief Accountant to the Commission.

In the last 2 years that the Commission was inaugurated, Contractors are made to forfeit 10% of the total sum of their contract sum being deduction for VAT and Withholding Tax to the tune of 2 Billion naira but our investigation revealed that the Chief Accountant after deducting the 10% at source from the contract sum pays the money into private account of the Secretary to the commission on the direct instruction of chief Andy Osawota acting as a Chief Accounting Officer to the Commission. These taxes are collected on behalf of the Federal Inland Revenue Services (FIRS) which ought to be remitted to FIRS but are now been paid into private account thereby defrauding the Federal Government of Nigeria fund that are meant for development of the country and in attaining the 7 points agenda of President Umar Musa Yar’adua.

In line with this administration zero level tolerance for corruption and our organization avowed mission to stamp out corruption in all its ramification, we carried out an independent investigation and our finding were as follows:
1. That when contracts are awarded by the DESOPADEC, 10% of the total contract sum is deducted by the commission as VAT and withholding Tax, this sum is deducted at source before contractors are issued with bank cheques.
2. The deducted 10% rather than been remitted to FIRS is paid to the nominated private account by Chief Accountant on the firm instruction of Chief Andy Osawota exercising his powers as the Chief Accounting Officer.
3. The total sum accruable to the FIRS as remittance is about 3 Billion naira but our investigation revealed that no such funds were remitted to the FIRS. The amount above mentioned represent 10% of the capital expenditure of the Commission budget approved by the Delta State House of Assembly.
4. We have also perused the original copy of Code Conduct Asset Declaration Form duly filled by Chief Andy Osawota at the time he was appointed as secretary to the commission but the Code of Conduct Asset Declaration Forum does not include the following properties/vehicles acquired by Chief Andy Osawota, some of which are listed hereunder.
i. Massive estates comprising of 10 bedroom duplex. 6 nos. 4 bedroom bungalows, 15 rooms guest quarters, 12 rooms boy quarters, 2,000 sitting capacity Hall, swimming pool and security post nearing completion at Orogum town Ughelli North local government Delta State at conservative value of N600,000,000.00 (Six Hundred Million Naira.)
ii. A 6-bedroom Duplex with Boys quarter situate by Mechaval Hotel, off Refinery Road, Effurun, Delta State valued at N250,000,000.00 (Two Hundred and Fifty Million Naira.)
iii. A 6-Nos bungalow Estate bought from Chief Poge Otirikpe by Chief Andy Osawota now leased to DESOPADEC as Guest House valued at N300,000,000.00 (Three Hundred Million Naira.)
iv. Various landed properties at Warri, Lagos and Abuja
v. A fleet of SUVs, Sedan cars.
vi. Purchase of 100 Hyundai Buses for United Mandate for Uduaghan founded and funded by Chief Andy Osawota.
vii. Hefty bank accounts domiciled at Bank PHR, First Bank, Ecobank, Zenith and ETB Warri and Effurun Branches.
viii. Offshore accounts in London and United States.

We stand to declare that if the EFC does not act speedily by investigating these massive fraud in line with Mr. president zero tolerance for corruption, we shall have no option other than to initiate legal proceedings to compel the FIRS and EFCC to carryout their mandatory and statutory duties. It is also pertinent to note that Chief Andy Osawota asset declaration form is now been shrouded in secrecy by the code of conduct bureau in Asaba Delta State.

It is therefore our prayer that the Commission invite Chief Andy Osawota for questioning in relation with the 10% AT and withholding taxes which he has failed to remit the FIRS and the source of his questionable wealth and acquisition valued at over 1 Billion naira within a space of two years as Secretary Chief Accounting Officer to the Delta State Oil Producing Development Commission (DESOPADEC).

We await your immediate and positive action in this regard.