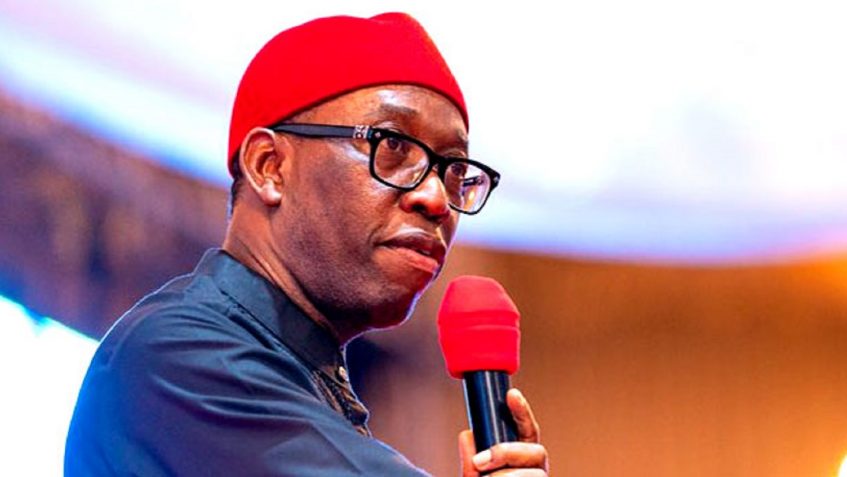 Gov. Ifeanyi Okowa of Delta has inaugurated the State Council Secretariat of the Nigeria Union of Journalists (NUJ) in Asaba, 31 years after the state’s creation.

Okowa lauded the journalists for their contributions to the development of the state, while urging them to report verifiable information to appropriately inform and educate the people.

“I listen carefully to the National President of the NUJ, Mr Chris Isiguzo, and I must commend him for his speech, in a growing society and Nigeria of our dream, everything he said is very important for the growth of this nation.

“The independence of the press is very instructive and it is something that we need to practise.
“I also urge the press that in the face of all pains and pressures, they must as much as possible, inform appropriately and be sure that the information that gets out to our people is the right information and that such information is Justiceable.

“The press can stand their grounds at all times; sometimes, politicians and other people may put you under pressure but I trust you must maintain your stand.

” I want to appreciate the State Council NUJ Chairman, Mike Ikeogwu, and members of the press for the partnership in terms of reporting and to inform our people of our various programmes and projects in the state.

“We have had a good level of co-operation and they know that we did not gag them but we work as friends,” Okowa said.

The governor said his adminstration would continue to work and deliver its promises to the people till the last day in office, adding, ” there is no doubt that we have done a lot in the course of the past seven and half years.”

While assuring the union of meeting their requests, Okowa berated the attitude of certain politicians whom he said wanted to play to the gallery by distorting information.

“We don’t look for praise singing, but those who do not want to speak the truth because of politics, we hardly say things in the negative because recently, I heard one of our top politicians in the state, who aught to know, said that we have done nothing in Asaba.

“And I begin to wonder why people who are highly placed in this nation, speak in that manner and try to deceive the people. That is very insulting to the people, because they know what Asaba was like before we came in,” he said.

The governor said that his administration spent and committed billions of naira to build the storm water drainage systems that took care of the flooding that had ravaged the state capital for years.

According to him, the various road networks, leisure parks and film village among other developmental projects, speak volume in the last seven and half years.

” Also, when I was building the state Secretariat, the same persons stood against it and today the civil servants testify that it is a conducive place to work in.

“Today, there is a university in the state capital and if you step into the university, you will see massive infrastructure development taking place.

“And by the grace of God, by the time we leave in May, the deputy governor and I will be proud that we were here in government for eight years,” he said.

In his remarks, the NUJ National President, Isiguzo, stressed the need for government not to gag the press but provide enabling environment for free press.

He thanked Gov. Okowa-led government for completing the state council Secretariat and ensuring that journalists were operating in a conducive environment.

“While we acknowledge that the press should at all times hold those in authority accountable, yet government must not be seen interfering with journalistic affairs.

“Government can help in creating conducive environment for media freedom by removing all obstacles and encouraging better working condition for journalists,” Isiguzo said.

Earlier, the State Council Chairman, Ikeogwu, thanked the governor for delivering a brand new Secretariat to the council after 31 years of the creation of Delta.

“By this project, you have given the state NUJ council a roof, a name and identity by taking us out of the streets since the creation of the state 31 years ago.

He also thanked all stakeholders, including the Secretary to the State Government, Chief Patrick Ukah; the Commissioner for Information, Mr Charles Aniagwu; the Chief Press Secretary to the Governor, Mr Oilsa Ifeajika and others for their role in the realisation of the project.

” I want to also specially thank and acknowledge the former Gov. Emmanuel Uduaghan, who laid the foundation of this secretariat,” Ikeogwu said.

He, however, pledged the council’s resolve to ensure that journalists remained neutral and positive in reporting facts to spur development in the state.

He, lauded the governor for the various infrastructure development, empowerment and jobs creation programmes while wishing him well in his bid as he aspired to the position of Vice-President of Nigeria in 2023.

Kiriku reacts as lady who accused him of abandoning family makes U-turn, begs for forgiveness – [Video]