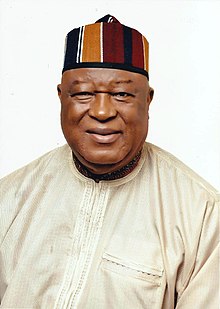 An All Progressives Congress, APC, governorship aspirant in Benue state, Senator Barnabas Gemade have vowed to pursue the matter instituted against the governorship primary election of the party to a logical conclusion because it is a fight for justice.

Recall that Senator Gemade and some aspirants had individually approached the courts following the protests that greeted the process that produced the gubernatorial candidate of the APC in the state, Rev. Fr. Hyacinth Alia.

The aggrieved aspirants are contending that the process that produced the Benue state APC candidate was skewed and failed to comply with the provision of the Electoral Act 2022 and should be nullified.

RELATED  Biden meets with Prince of Wales in Boston

Senator Gemade in a statement by his media aide, Solo Dzuah enjoined Benue people to shun rumour mongers suggesting he had jettisoned his suit.

He stated that “I am vigorously pursuing my case in court because it is about justice. The court has heard my case judiciously, and is about to set aside a date for the judgement which will come up any moment from now.”

The APC governorship aspirant spoke at Agagbe in Gwer West Local Government Area, LGA, where he witnessed the burial of the wife of his staunch loyalist and former acting chairman of Gwer West, Cletus Igbaato.

RELATED  The unknown powers are trying to destroy my life off a tweet so does this prove that my so called suspicion was true? - Kanye West asks after being dropped by multiple brands over his his anti-Semitic comments

Represented by his campaign Director General, Citizen Richard Asema, Senator Gemade urged all his teeming supporters to “disregard the rumours from people that have chosen propaganda against the truth and reality.”

While commiserating with the bereaved, the former federal lawmaker urged him to be steadfast and look up to God for comfort in his moment of grief.

Present at the ceremony among others were Col. Igbaya Anshungu (retd) who is the Security Advisor of the project, the Director of Youth Mobilization, Mr. Joseph Guana, Mrs Aondoakaa Carolyn and many other members of the project.