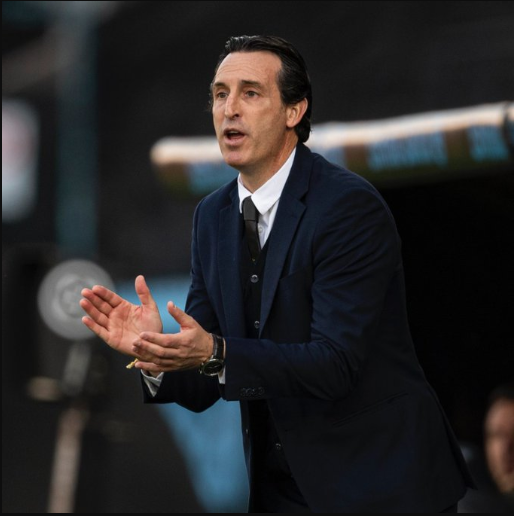 Premier League club, Aston Villa have confirmed Unai Emery as their new manager, and is expected to take over next month pending the outcome of his work permit application.

Villa made the move on Monday to pay Villarreal the £5.3million clause to release Emery from his contract, and he is believed to have agreed a three-year deal to succeed Steven Gerrard.

Emery is poised to return to the Premier League three years after he was sacked by Arsenal, where he was in charge for a little more than a season.

Caretaker-boss Aaron Danks will again be in charge for Saturday’s game at Newcastle while Emery waits for his ‘work permit formalities’ to be completed. Emery looked set to take charge of Newcastle last season only to have a last-minute change of heart.

‘Aston Villa is delighted to announce the appointment of Unai Emery as the club’s new Head Coach,’ Villa said in a statement.

‘Unai joins from Villarreal, whom he led to Europa League success by beating Manchester United in the final in 2021 as well as the semi-finals of the Champions League last season.

‘A highly experienced top level coach who has managed over 900 games, Unai has also previously managed in the Premier League during a spell with Arsenal, leading the Gunners to a Europa League final.

‘He has also enjoyed notable success at Sevilla and at Paris Saint Germain. In Seville, he won three successive Europa League titles between 2013 and 2016 before going on to lift a Ligue 1 championship in France as well as two French Cups, two French League Cups and two Trophée des Champions.

RELATED  EPL: My job at Chelsea is the hardest in world football – Potter

‘Unai will take over from November 1st after his work permit formalities are completed.’

In a statement confirming Emery’s departure, Villarreal said: ‘Head coach Unai Emery has informed Villarreal CF of his unilateral decision to terminate his contract with the club.

‘The Basque manager will therefore leave the club, which he joined in the 2020/21 season, and will hold a farewell press conference tomorrow at the Training Ground at 12pm CEST accompanied by the Yellows directors.

‘Emery has gone down in Villarreal CF history for becoming the first coach to win a title with the club, the UEFA Europa League, as well as the historic achievement of reaching the Champions League semi-finals last year and helping the team qualify team for European competitions for two consecutive seasons.

‘Villarreal CF would like to thank Unai Emery for the work he has done and wishes him the best of luck in his career.

‘The club’s director of football, Miguel Ángel Tena, will lead the team’s training session tomorrow at 5pm CEST at the Training Ground (first 15 minutes open to the press) and will take over on an interim basis until the club announces a new head coach.’