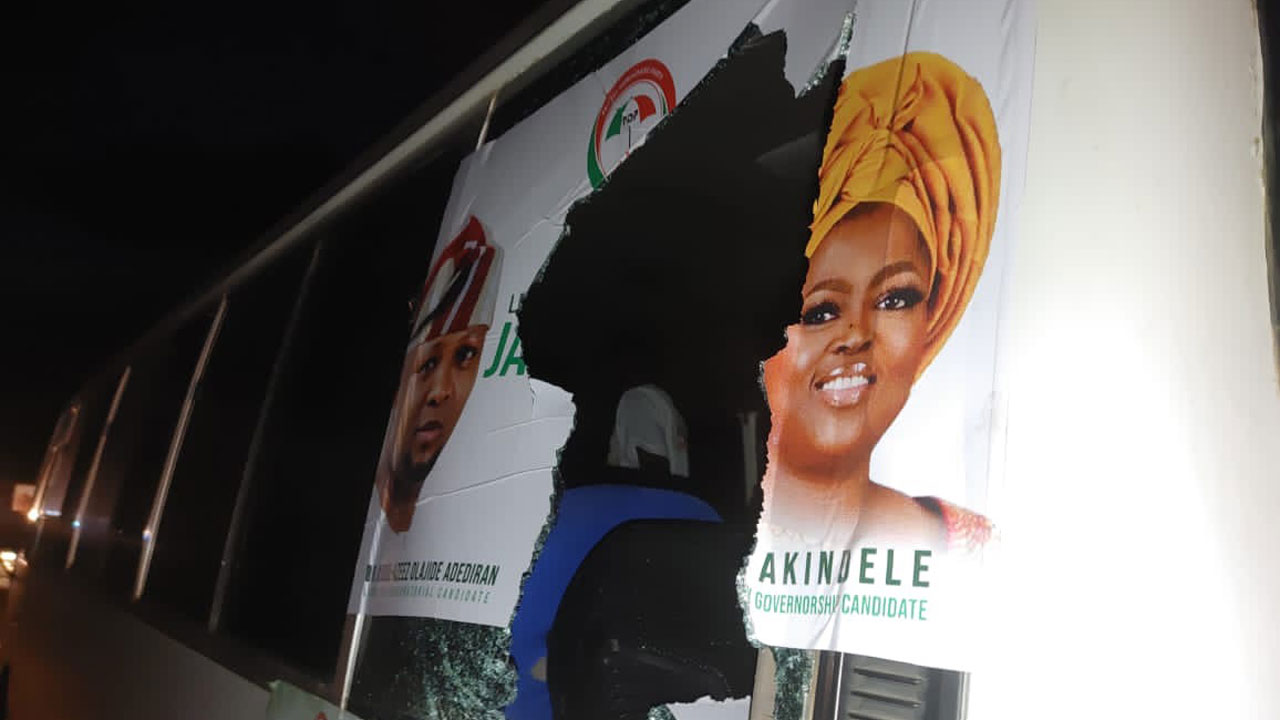 APC denies sponsoring violence, blasts PDP
Peoples Democratic Party (PDP) in Lagos State, yesterday, urged the police to fish out miscreants that disrupted the campaign tour of the governorship candidate of the its party, Dr. Olajide Adediran, popularly known as Jandor, and his Deputy, Funke Akindele, in Badagry.

The Guardian reports that Jandor and Akindele campaign train was on Sunday night attacked by suspected miscreants at the Ikoga Junction area of Badagry Council of the state.

The incident, which had some journalists sustaining injuries, happened while returning from a visitation to members of the PDP.

Chairman of the Media and Publicity Secretary, Hakeem Amode, said the attack led to many members of Jandor’s entourage sustaining injuries, while a broadcast journalist was admitted to the hospital.

Amode said the attackers were shouting: ‘APC,’ while shooting and using dangerous weapons.

He said: “Recall that our party raised concern over the threat to use sponsored thugs to attack the campaign trains of our candidate, Jandor, recently.

“We would like to state categorically that this will not deter the determination of our candidate to campaign for the next election and win the election come 2023.

“We hereby call on the Commissioner of Police, Lagos State and the Area Commander of Police in the Badagry Division to do everything possible to fish out those behind the attack and take necessary disciplinary actions against them to forestall such occurrences in the future.”

MEANWHILE, the All Progressives Congress (APC), Lagos State chapter, has asked the PDP to stop heating up the polity as it pursues its ambition.

The party made the remarks in a statement by its Publicity Secretary, Seye Oladejo, in reaction to allegations that APC sponsored thugs on Jandor’s campaign team.

Oladejo said: “Our attention has been drawn to the purported attack on the Lagos State PDP governorship candidate, Jandor, while on a campaign tour. It is important to state that APC abhors thuggery and any other form of violence in the name of politics.

“However, we find it repulsive that Jandor could level such grievous allegations and conveniently forget to give the names of the victims and the action taken by the battalion of security operatives, who always outnumber his entourage.

“This is just another level in the propaganda machinery of the PDP candidate to curry public sympathy through blatant lies and unsubstantiated claims.”

It accused the PDP of heating up the polity with needless lies and asked them to focus on issues that will make life more meaningful for Lagosians.

“Perhaps he should spend more time seeking the support of the members of his party, who have been largely indifferent to his campaign rather than clutching to straws and crying wolf when there’s none.”

Serie A: Osimhen scores two in Napoli’s 3-0 demolition of Spezia

There was no I stepped down, Omo-Agege’s camp behind plots, propaganda – Delta guber NNPP candidate, Agbi