Apart from NBA, another professional association of lawyers, LSN emerges 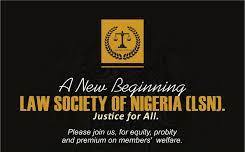 Apart from the Nigeria Bar Association, NBA, another professional association of lawyers known as the Law Society of Nigeria, LSN, has been established.

The association is led by Mr Kunle Ogunba, SAN.

This is contained in a statement issued on Sunday by the National Publicity Secretary of the LSN, Mr Douglas Ogbankwa.

TheNewsGuru.com (TNG) reports that legal practitioners in Nigeria had been hitherto regulated solely under the umbrella of the NBA founded in 1933.

Ogbankwa said in the statement that the LSN emerged in a bid to redefine the ideas of the founding fathers of legal profession.

Ogbankwa referred to the LSN as a “new sheriff in town”.

RELATED  2023: I’ve Perfomed Better Than All My Predecessors – Abiodun

He described the legal profession in Nigeria as having a chequered history spanning from “the sublime to the ridiculous”.

Ogbankwa said the LSN was established to keep legal practice in Nigeria in line with international best practices.

“In redefining the ideas of the founding fathers of the legal profession in Nigeria, the Law Society of Nigeria, a new professional association of lawyers called to the Nigerian Bar, has been established.

“This is in keeping with international best practices, which allow for an alternative to ensure that lawyers thrive within the realm of those they have shared values with,” he said.

According to Ogbankwa, in a letter dated October 24, the pro tem National Executive Committee of the LSN notified the Body of Benchers of the association’s existence and its national officers.

“The LSN, with membership, spread all over Nigeria, exists to empower the legal profession with quality member services, facilitate access to justice, maintain and advance the cause of justice, and promote the rule of law through advocacy and good governance,” he stated.

“It is on the verge of uncommon and necessary reforms in our legal annals and the ageless egalitarian posture on the freedom to lawfully associate, that the LSN also writes your distinguished body, introducing herself,” he stated.