3 days before wedding, lady calls it off over fiancé inability to provide money

A Nigerian lady identified as Kemi has canceled her wedding due to her fiancé’s failure to provide funds for the planning.

She said that since he engaged her and fixed a date for the wedding, she has been handling all expenses because he has not dropped any money towards the wedding arrangement.

Kemi announced the cancellation just three days before the wedding, mentioning her fiance’s nonchalant attitude as the main reason for her action.

According to her, he told her that his money is in a fixed deposit and offered to refund her everything that she spent.

She, however, said she visited a counselor and made a decision to cancel the wedding, though she is not confident that she made the right decision.

Kemi wrote; ”Just called off my wedding because of my fiancé nonchalant attitude. This guy hasn’t dropped one penny and the wedding is in 3days, he keeps saying his money is in a fixed deposit and that he will refund me. Spoke to a counselor and decided to call it off. Hope I did the right thing.”

RELATED  The 'callous and inhumane' school shooting hoaxes are still happening around the US. Here's what we know

Meanwhile, a young man has received heavy backlash following his choice of unhygienic lunch aimed at getting attention on the internet.

A video making rounds on social media captured a man having lunch with dirty water from a muddy road. 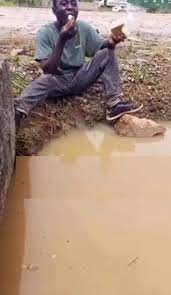 In the video, the individual dipped bread in the stagnant water despite expressing inconvenience as he swallowed every bite.

He however proceeded to eat as many times as he could while taping the event.

Netizens frowned at the decision as many termed it an unreasonable clout chasing that may have long-term health consequences.